Hi you guys,
We spent the day looking at WW1 battlefields around Ypres, and visiting some of the cemeteries. Tonight we are in Ypres. We attended the nightly ceremony at the Menin gate.
I was asked to lay a wreath, together with Terry Alderman, and another lady whose relatives grave we visited today, on behalf of our group.
There was a WW2 vet there, aged 95, who rose from his wheelchair to climb the half dozen steps to lay a wreath, with his children on each side supporting him. I spoke with him later. He is a scots border soldier, who served the whole of the war (39-45) and survived unscathed. He said of 1500 men in his battalion only two survived without injury. He made my day!
I did have to wear the AST shirt, but had my Taverners scarf on my ponytail.
I only have photos after of course, but there are several we can get later of the laying itself.
What an honour. I’m still in awe.
There was another cricket touring party laying a wreath as well, and some Welsh Guards too.
Tomorrow the Somme, and I revisit my father’s uncle’s grave at Bailleul.
Anyway, thought you might like to know.
Cheers
Ruth

Below is our wreath, with a lot of others up the steps behind. Ours is the one with the sun flower in the foreground. The second shot is the “after” with Terry and my friend. 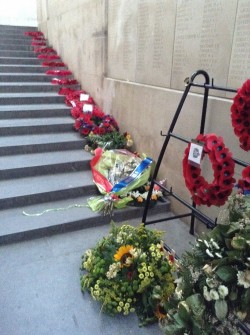