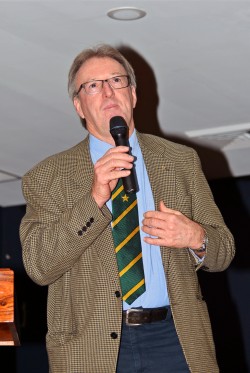 On Saturday the 14th of June many members of The Lord’s Taverners Northern NSW joined together for a two-course meal at The Club in Taree.  The meals were enjoyed by all as well as the desserts that were served whilst the guest speaker, Geoff “Henry” Lawson, appeared on stage.  Geoff shared many stories and fond memories on stage, the audience were captivated and he was more than willing to answer questions that were asked.

Rick McCosker was also present at the dinner and joined Geoff on stage towards the end of the night where they reminisced over the past years and enlightened the audience with some great facts.  Once the two speakers exited the stage tea and coffee were offered and this then created a relaxed environment where the members were able to interact with the guest speakers as well as each other.

President of New Castle Branch was a special guest.