Wednesday September 15th saw the curtain draw on a very successful schools cricket competition conducted by the Northern NSW Lord’s Taverners. The competition in its third year was taken on by the Taverners who saw synergies between the competition’s objectives and their own.

The Taverners were very successful in expanding the competition beyond its Lismore boundaries to take in the whole of the NSW Far North Coast region. 25 teams from 15 schools entered teams into the Adam Gilchrist Shield and the Matthew Phelps Shield, totalling nearly 275 children from northern NSW.

The Adam Gilchrist Shield is for years 9-10 school teams and the Matthew Phelps Shield for years 7-9. Teams can be mixed and as a result the competition had its first female participants with approximately six young girls joining the boys and having a go. The motto of Taverners is “Giving the young and disadvantaged a sporting chance”, and in a region where there is little competition for girls, this has been a good breakthrough.

For the first time schools from the Ballina, Byron, Brunswick and Tweed districts were involved along with Evans Head. Kingscliff High School were the stand out newcomers, with their teams making it to the semi-finals of both competitions. Xavier College Ballina also flew the flag for the Ballina district with their Matthew Phelps Shield team making it through to the semis.

The first and second rounds of the competitions were played on 25th August at venues in Casino, Lismore (2) and also in the Tweed. Casino hosted the largest venue at Queen Elizabeth Park involving four grounds. Being the short format of cricket you can fit in two games in a day. These rounds were round-robin format leaving one team from each venue to progress to the semi finals. In the second round there was a tie in the Matthew Phelps Shield between Alstonville High School and St. John’s Woodlawn.

Woodlawn showed great composure in chasing down the St. Mary’s total to take out the final of the Adam Gilchrist Shield, with Kingscliff picking up third place. Richmond River proved too strong for Trinity in the Matthew Phelps Shield winning it for the first time while Xavier College collected third place. Matthew Phelps is an old boy of Richmond River HS so it was a nice touch to the final to see them win it.

The competition was very successful and has grown into the largest single schools cricket competition on the NSW Far North Coast (possibly the entire North Coast) in just 3 short years. The features of the competition are getting two games of cricket in one day, local competition in the early rounds, the thrill and excitement of the Twenty20 format and the excitement of finals day. Everyone seemed to have a great time kids, teachers and officials included.

However events such as this cannot happen without a lot of planning and organising and to this end the work done by the members of the Lord’s Taverners’ organising committee was outstanding. Neil Moreton did an outstanding job as the Competition Co-ordinator, whilst  John Buttrum, Denis Byrne, Don Whitelaw, John Howard and Warren Phelps each played significant roles in ensuring the competition went ahead without a hitch. A genuine word of appreciation and gratitude must be extended to each of these gentlemen for their contributions. 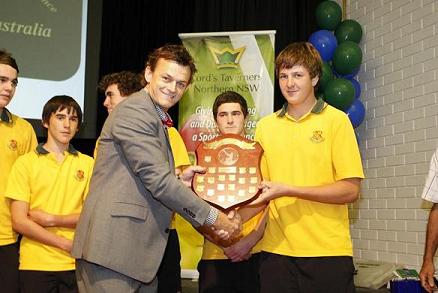 2011 Twenty20 Program:
Unfortunately, the rain which spoiled our Top Sports Camp in January 2010 also ruined the 2011 Twenty20 Schools Competition, which was cancelled without a ball being bowled.
2012 Twenty20 Program:
Once again we will, with the sponsorship of Gabba Sport, conduct this popular program in Far North Coast Secondary Schools.
Schools which have participated previously will be contacted by the organising committee, but if any other secondary schools in this area would like to apply to enter, they should contact Lord’s Taverners Northern NSW by email or phone. Numbers and contact details on our Contacts page.