On 8th January 2014 we welcomed in the New Year and we welcomed into our midst one Henry Blofeld and his beautiful new wife, Valeria. “Blowers”, as he is affectionately known throughout the cricket world, came with a lifetime of stories, experiences and humour, and entertained an audience of over 240 people at the Lismore Workers Club, one of our major corporate sponsors.  For almost an hour, Henry told the story of his life. He told the story of a promising cricket career cut short by a near-fatal accident. He told the story of how he became a cricket commentator. He told stories about his contemporaries. He told stories of cricketers. He told quite intimate stories of being “in the box” with some other well-known commentators, and gave impersonations of some of the most famous. 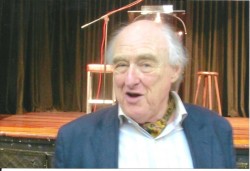 Initially a little bemused by the thought of children being present, Henry just told it as it is, and finished the evening surrounded by about twelve lads who were playing in the concurrent Lismore Under-12 cricket carnival, all seeking more stories and his autograph. 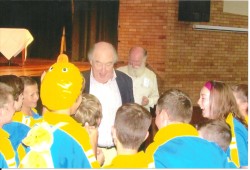 This was another great success story in our quest to give the young and disadvantaged in our region a sporting chance!  On the next morning, Henry attended the local studios of the ABC, where he was interviewed by Liz Ellis for her afternoon show. Again, he was unhurried, accommodating and very, very entertaining.  Thank you Henry for sharing your stories, your wit and your time with us all. 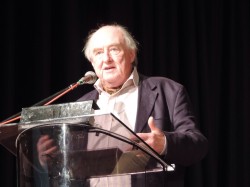