While Deniliquin can hardly be seen as being in NORTHERN NSW, the main partner in our special Corporate Sponsor, Rhino Water Tanks, Andrew Jefferies lives there and as a contemporary of our Patron, Adam Gilchrist, is making a wonderful contribution to grassroots cricket. Here is a letter from Andrew about how he is supporting a young country cricketer there in Deniliquin:

“Hope you and your families are well.

“I just thought I’d let you know about a young cricketer from Deni I’m helping out.
“His name is Todd Marshall, son of Robert Marshall and nephew of Stuart that may have been playing in Deni when you where here.
“Todd has made the NSW Combined High School cricket side which will tour England at the end of June this year.
“Cricket records show that Todd is the first Deni cricketer to achieve this accolade. (For the record, Adam left Deniliquin before he reached high school!)
“Although Todd’s parents are extremely proud of his efforts they are going to struggle financially to come up with the $8000 expense for the tour. Especially now that Stuart has lost his job due to a hip replacement last year.

“We are having several fund raisers and most sporting groups in town are helping out in some way as well.

“I framed up a pair of gloves Adam signed a while ago for me and this will be a silent Auction item which is currently sitting at $800.
They came up really nice and I’ve done this a few times to raise money in the right areas when needed. Sometimes they fetch up to $2,000

“I hope you don’t mind, but I have said in an interview for the paper on your behalf Gilly that you are always supportive and willing to help young up and coming talent especially from country areas such as Deni. And I will keep you guys informed of his progress.
“He’s a great kid with heaps of natural sporting ability and will be one of those kids that will have to choose cricket or football soon.

“Little things like signing a pair of gloves can make a huge difference to someone’s life back here in Deni so thanks again mate.
“Below is a photo of myself with Todd and the auction item.

How could we “mind” about anything such a young man as Andrew quoted us as saying!!! He personifies our motto of “Giving the Young and Disadvantaged a Sporting Chance”.
WELL DONE ANDREW AND THANKS FOR THE SPONSORSHIP FROM RHINO WATER TANKS! 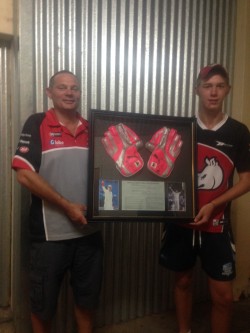